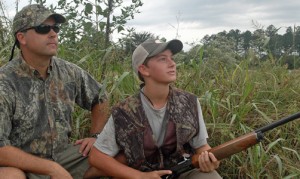 Last month, six children in Chester County, S.C., put their names in to hunt with Sheriff Underwood, an well known local outdoorsman. Meanwhile, Alex Collins saw a post on Facebook that accidently listed Chester County, PA (his home county), instead of Chester County, SC. He thought his local sheriff was holding the contest, and submitted the paperwork.

He wrote that his mother was an ill single parent, so he had nobody to take him hunting and fishing. He was devastated when he found out the trip was in another state almost 600 miles away.

When the mix-up was discovered by Chester County, Pa. Sheriff Carolyn “Bunny” Welsh, their deputies bought an airplane ticket for Alex so he could hunt and fish for three days with Underwood last week. People across America were enthralled by the generous gesture and the sharing that Underwood and his staff offered.

But the six kids in Chester County were completely ignored. Now they are getting the star treatment by a all expense paid shopping trip to Academy Sports to fill as much hunting gear into their baskets as they can…for free!

The Academy Sports shopping spree is scheduled for 10 a.m. Monday.

Meme Coin Hoge About To Get Listed on Major Exchange –...