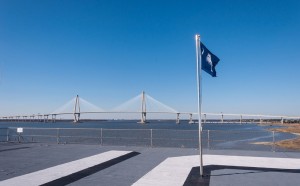 It has been about a year since the National Medal of Honor Museum Foundation signed a lease for Patriots Point with plan to build a new $100 million military museum.

To many people’s surprise, the foundation is now well ahead of its goal of $5 million 2014, and now has plans to break ground on the Charleston museum as soon as next year.

Since the initial lease signing of Patriot’s Point, the foundation has successfully built relationships with many powerful individuals such as billionaire Ross Perot, former President George W. Bush and former Secretary of State Henry Kissinger, and they’re currently in talks with Robert Duvall to help create a support base in Hollywood.

The new Medal of Honor Museum will be built on 7.4 acres near the Patriots Point parking area. It will be dedicated to the nearly 3,500 veterans who have received the highest of honors since it’s establishment in 1861. The museum will offer an interpretive network to give a sense of who these individuals were and what they did for the United States.