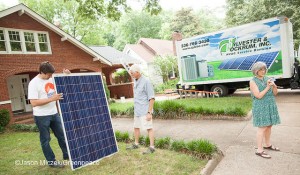 The State of North Carolina currently ranks fourth in the nation for its solar capacity, according to the Solar Energy Industries Association, and Duke Energy estimates about 1,700 customers own rooftop solar systems.

A local Charlotte initiative is plans on drastically increasing that number.

Solarize Charlotte, endorsed by the U.S. Department of Energy, “uses neighborhood relationships, nonprofit networks, and bulk discounts to offer prices for solar installation that are well below normal retail value.” The new Charlotte-based program is all volunteer-run and offers discounts on installations and connects homeowners to tax savings and low-interest loans.

They just completed a three-month campaign to increase the demand for solar energy in Charlotte region. “One of the issues we all recognized was that even as solar dropped in price, people saw barriers, the goal is to help with everything involved.” commened project assistant Michael Zytkow.

The campaign worked with a solar company, the RED Group, that offered bulk discounts on installations. State and federal tax credits cut the cost, and low-interest loans were used, reducing the cost by up to 75% off the retail price of a solar system. Typical systems range from about $4,500 retail. Many Charlotte homeowners have also started buying self-installation solar kits online for around $1,000.

Roughly 600 people showed interest in installing solar to their home, about 186 asked for proposals, and 24 signed installation contracts. An additional 89 projects are still in the consultation stages.

Would you ever consider having solar panels installed on your home?