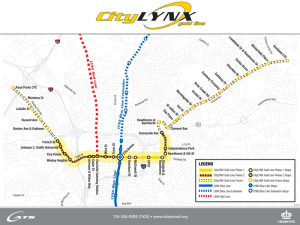 The streetcar now runs for 1.5 miles from the Time Warner Cable Arena in Uptown, to just left of the Presbyterian Medical Center. There are six stops on the route along Trade Street and Elizabeth Avenue – and it’s free to ride!

The city has already set a good amount of the cost aside to start construction on the second phase of the Linx GoldLine streetcar – expanding the current route by 2.5 miles.

Obama’s new budget has a $75 million grant for Charlotte to help pay for the $150 million construction costs of phase 2.

At this point however, the city has no additional funds to build a third streetcar phase, or any other rail project, so it is unclear if the complete LinxGold line vision will ever be finished.