In a public hearing and vote that lasted well over five hours, the Charlotte City Council rejected a new LGBT ordinance. The main two issues of the ordinance were; allowing anyone to use any bathroom based on their sexual preference, and creating several new protected classes for public businesses.

The city counsel remarked that they had received tens of thousands of E-mails, texts, letters, and phone calls. After hours of discussion from the public and from the counsel, they voted down the new ordinance.

Here are the top 3 reasons that seemed most influential for the vote;

#3 Many Felt It Was Rushed

Counsel member Kenny Smith, stated that he believed the bill was motivated not by a desire to end discrimination but by a political agenda to “impose the progressive left’s new morality on our citizens.”

In a recent article by the Charlotte Observer, local activist David Benham was quoted in saying, “Should a gay T-shirt maker be forced to create anti-gay marriage T-shirts? Should a Muslim baker be mandated to make a gay wedding cake? That’s exactly what this ordinance will do if passed.”

Both citizens and counsel members commented that more time should have been given to carefully weigh the ramifications that this ordinance would have on all people.

One of over 100 people to comment was Thomas Dellinger, “As a father and a husband, I cannot see how you could ever pass an ordinance that could raise the risk of sexual criminal acts,”

Most of the speakers echoed his sentiments, commenting that allowing anyone to use any bathroom they desired would increase the risk of sexual predictors throughout our city. One woman even noted that in other cities that have passed similar ordinances, sexual assaults in bathrooms have actually increased. 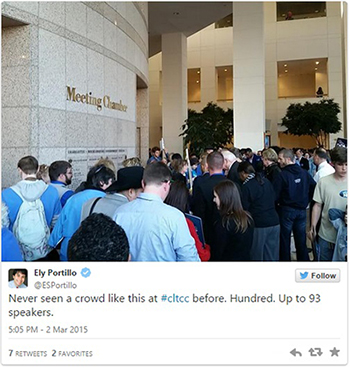 Some 120 people signed up to speak at the 6 p.m. meeting. They spoke, one at a time, for two minutes each. Prior to the meeting, supporters and opponents sent nearly 40,000 emails to City Council members about the proposal.

It’s now predicted that the city will hear from a broad range of coalitions about the vote, including the business community.

The ordinance was voted down 6-5, after a marathon meeting that lasted over 5 hours. Council members David Howard, Claire Fallon, Vi Lyles, Patsy Kinsey and Al Austin, all Democrats, voted in support of it.

What do you think about yesterday’s vote?