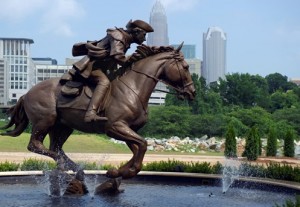 Every year on May 20th, Charlotte (Mecklenburg County) celebrates ‘MecDec Day’. A celebration of Charlotte being the first city in America to declare its independence from England.

In 1775 the 13 British Colonies in North American were contemplating a break from Great Britain. As word of the Boston Tea Party spread through the North Carolina Colony, people in Mecklenburg County decided to have a meeting, it was led by Colonel Thomas Polk, commander of Charlotte’s Militia. A total of 9 local militia groups were represented. The decisions of this meeting would be binding for all Mecklenburg citizens.

On Friday, May 19th, 1775, as they were meeting in the courthouse at Trade and Tryon St, an express rider gave news that British soldiers had shot and killed fellow British citizens in the battles of Lexington and Concord. They then wrote five resolutions that now make up ‘The Mecklenburg Declaration of Independence’, declaring that they had separated themselves from Great Britain.

The five resolutions stated that Great Britain had; “wantonly trampled on our rights and liberties and inhumanly shed the innocent blood of American patriots at Lexington”, that we “dissolve the political bands which have connected us to the Mother country”, we declare ourselves “a free and independent people,” and “The Crown of Great Britain never can be considered as holding rights, privileges, immunities, or authority therein.” View the complete text of the Mecklenburg Declaration of Independence here.

It was then read from the courthouse steps at noon on May 20th to a large gathering of Mecklenburg county citizens. Everyone knew about the May 19th meeting, and the news of Lexington and Concord increased their interest. Since the decisions would be binding on all of the citizens, people came from all over North Carolina. 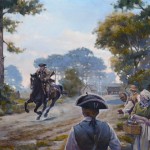 On June 1, 1775 Militia Captain James Jack (statue pictured above, in front of the CPCC main campus) rode to Philadelphia to give both documents to the Second Continental Congress. The representatives from North Carolina read and approved the documents. However, at that time, the rest of Congress was approving a petition to the King asking for reconciliation. The citizens of Mecklenburg County were the only free people until the rest of America declared their independence on July 4, 1776.