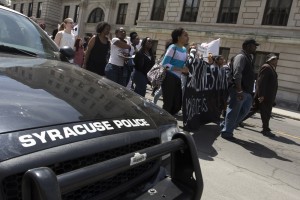 Today people from all over the greater Syracuse region descended on downtown to protest police brutality and show their support for Freddie Gray, the Baltimore resident who recently was killed from a spinal chord injury while being detained by police.

The march started this afternoon at the University, and ended on Clinton Square in downtown Syracuse.

Scores of people filled South Clinton Street, blocking traffic. Heated arguments broke out between protesters and motorists. Dozens of cars and trucks were forced to stop and turn around, but some forced their way into the crowds and were immediately surrounded by shouting protesters.

Police cars followed the protesters throughout the afternoon, and one officer began to blared his horn when one of the chants began to get out of hand.