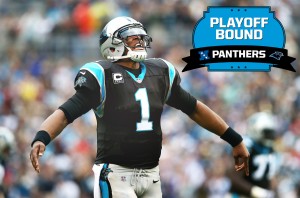 After this past week’s loss in a key divisional game to the Saints (4-4), the Panthers (3-5-1) seem to have almost no hope for the playoffs, especially since it’s now been over a month since they won a game.

But don’t lose hope just yet! The Panthers play in a truly strange division, they still have 3 games remaining against Tampa Bay and Atlanta, which, combined, only have 3 wins between them.

The Panthers have a solid chance to win the NFC South, considering that the New Orleans Saint’s next four games are against teams with .500 records or better – San Francisco, Cincinnati, Baltimore and Pittsburgh.

The Panthers may be going to the playoffs for the second year in a row – something that hasn’t happened in Charlotte for over 20 years.

In order to do that, they will need to do;

They Panthers have been relatively healthy this season compared with some of our previous ones, and they’re expected to get fullback Mike Tolbert back for Week 13’s trip to Minnesota, which could be a late-season boost to their passing game.

They only lost one starter to a season-ending injury so far (Chase Blackburn), who was in a platoon with A.J. Klein. But the nagging injuries caught up with the offensive line against New Orleans, when undrafted rookie David Foucault was overmatched at left tackle.

Now we just need everyone else to stay healthy for the rest of the season.

This coming Monday night, the Panthers face off against an injured Eagles (6-2). Their Quarterback, Nick Foles is currently injured and will be replaced by Mark Sanchez, who has a questionable performance to say the least.

If and when the Panther’s beat the Eagles, it will give them a solid boost of confidence for their final 6 games.

The Panthers finally have running backs Jonathan Stewart and DeAngelo Williams healthy at the same time. Now it’s up to offensive coordinator Mike Shula to use them.

Running the ball would also benefit an offensive line that has not given Cam Newton much faith in his pass protection. Center Ryan Kalil is a skilled run-blocker, and undrafted rookie guard Andrew Norwell has an aggressive mentality that is better served in the run game.

The Panthers also need to significantly improve their run game to help themselves in the red-zone. They currently rank near the bottom of the league in red zone scoring, as well as keeping opponents out of the end zone after they’ve driven inside the 20.

Do you think the Panthers will make it to playoffs?