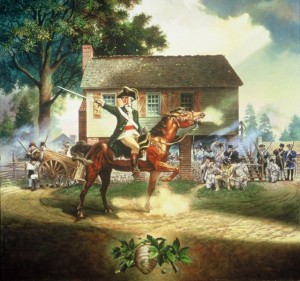 In 1780 (5 years after Mecklenburg declared it’s independence), William Richardson Davie and 150 American patriots set up camp around the courthouse at Trade and Tryon to wait for the invading British army led by Lord Cornwallis.

On September 26th, the entire British army confronted the militia at the courthouse. Davie and his men were outnumbered almost 10 to 1 when he told the militia to give “some earnest of what Lord Cornwallis might expect in North Carolina.” This initial resistance spirited up the people and led to further attacks on occupying British forces.

Lord Cornwallis only stayed sixteen days, and he later referred to Charlotte as “A Hornet’s Nest of Rebellion”. Davie and his 150 men truly were the first Charlotte Hornets. 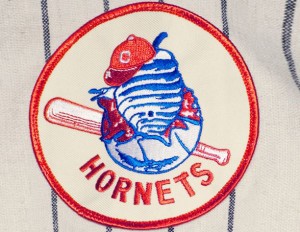 The earliest Charlotte Hornets sports team began in 1892, according to Minor League Baseball records. The Charlotte Hornets Baseball team played in various local leagues until 1937 when the Washington Senators made them their affiliate club team.

In 1940, Calvin Griffith built a 3,200-seat park in Charlotte’s Dilworth neighborhood where the team played until 1972. In 1976, Jim Crockett, Jr bought the stadium and renamed the team The Charlotte Orioles. In 1988, the team was again renamed to the Knights and moved to Fort Mill, until the new Uptown stadium was finished in 2013. 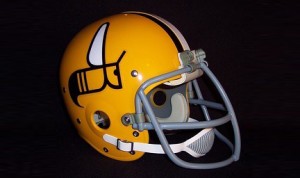 The next sports team to claim the name ‘Charlotte Hornets’ was Charlotte’s first major-league football team. They were relocated to Charlotte, North Carolina, from New York City in the middle of the 1974 season.

The team’s first home game in Charlotte was a major success. In the league’s brief history, the Hornets sold out all 25,133 tickets. The new Charlotte team – which played at American Legion Memorial Stadium – did far better in ticket sales than in New York. In four games at Charlotte, the Hornets sold over 80,000 tickets compared to just 75,000 in seven games at Downing Stadium. Due to extreme financial struggles with the owner, the league ceased the teams operations in the middle of the 1975 season. 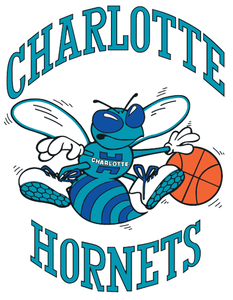 In 1985, the Charlotte Hornets basketball team was born. George Shinn, an entrepreneur from Kannapolis wanted to bring an NBA team to the Charlotte area, after noticing all the success college basketball was having in North Carolina. The new team was originally going to be called the Charlotte Spirit, but a name-the-team contest yielded “Hornets” as the winning choice.

In 2002, after several years of steady decline in fans, the Charlotte Hornets finished twenty-ninth (dead last) in the league in attendance. The NBA then approved a move to New Orleans.

In 2004, Robert “Bob” Johnson built the new uptown arena and started the newest NBA franchise, The Charlotte Bobcats. He saw very little success with the team, and eventually sold it to Michael Jordan in 2010.