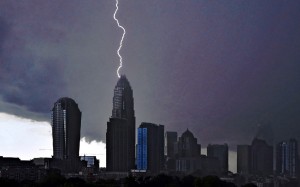 The National Weather Service has just issued a tornado watch and a flood watch for the Greater Charlotte region, including the counties of; Cabarrus, Gaston, Mecklenburg, and Union until 8 p.m. tonight.

Be on the lookout for the following danger signs:

If you see approaching storms or any of the danger signs, be prepared to take shelter immediately…

It has been four years since the last major tornado strike in North Carolina, during which two dozen tornadoes cut violent paths through North Carolina, leaving 24 people dead, hundreds of homes damaged, significant damage to roads and wildlife.