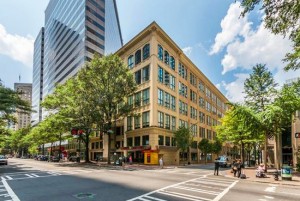 The streets of most newer American cities follow very clear East-West and North-South grid patterns, but not here. The streets of Charlotte have some of the most unusual patterns in the world.

Our city may seem like a new city, but it actually has a very rich history of Native Americans, famous battles, and gold. We were founded in 1768 (and officially declared independence from England in 1775) at the crossroads of  two Native-American trading paths which ran northeast-southwest and northwest-southeast. That intersection is now the center of our city – Trade and Tryon.

Trade and Tryon Streets became the framework for Uptown, which now has blocks that look more like diamonds than squares. 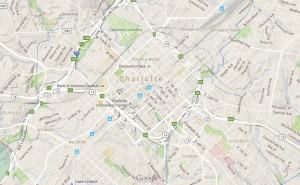 The crazy shape of our highways primarily evolved from the shape of the two major creeks, Irwin Creek (77 and top part of 277), and Little Sugar Creek (bottom part of 277).

I still haven’t figured out why i85 runs west to east at times, and south to north other times, but it most likely also has it’s roots in the Carolina Peidmond geography as well.

The reason for some of the other crazy anomalies in our city (Queens/Providence intersection, Queens loop, all the Sharon rds., etc) stem from the old farmers routes. The city of Charlotte was never really designed to be a major city, so many of the small winding trails simply grew over time.