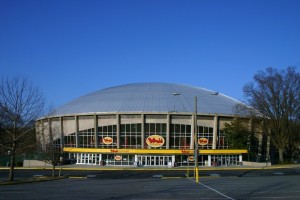 The city of Charlotte has just approve a $16 million ‘makeover’ of the to Bojangles’ Coliseum in order to become the new home of the Charlotte Checkers hockey team. The team will officially move at the beginning of the 2015-2016 season from their long time home at the Time Warner Cable Arena.

The new renovation plans will include installing ice-making equipment, replacing the seats, and installing a new scoreboard.

The Charlotte Checkers originally moved from the Coliseum to the Time Warner Cable Arena in 2005, the same year the $265 million city-owned NBA arena opened. Weekend dates went first to the Charlotte Hornets, then to major concerts and shows, which always left only a handful of prime nights for the Checkers.

The renovations and Checkers move will give Bojangles’ Coliseum more weekend business and free up nearly 40 nights for other events at Time Warner Cable Arena.

Charlotte’s city leaders are also hoping to partner with developers to build an amateur sports complex and hotel next to the Coliseum.