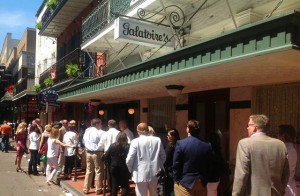 How much would you pay to eat some of Galotoire’s world famous turtle soup?

At this world famous New Orleans eatery, reservations are not taken, and some people are willing to go to extreme measures to get their turtle soup fix. Some of the more wealthy of the city have started to pay homeless people to wait in the line for them.

“I know some people who have stood out there for 18 hours before—it’s crazy. It it a Rolling Stones concert? No, it’s for a table at Galatoire’s.” commented  New Orleans native Nancy Mellon.

Since opening in the summer of 1905, the insanely popular restaurant has drawn in such famous patrons as Tennessee Williams (who inserted it into his play A Streetcar Named Desire) government officials, and even Mark Twain, who commented that the seafood was as “delicious as the less criminal forms of sin.”

The restaurant has loosened it’s “No Reservations” policy in 1999 when it started taking reservations for the upstairs dining room. The same food is served there, but the ambience is perhaps second-rate.

Have you had a chance to try Galotoire’s turtle soup?

Florida Teen Caught Posing As OB-GYN For A Month