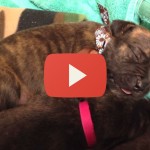 A bag full of rambunctious puppies were just discovered in a garbage bag near a gas station in Indian Land. This past week a man (who does not want to be named) showed up at the Indian Land Animal Hospital, holding a cardboard box housing four tiny baby puppies, the Herald Online reported.

The man was working near a gas station when he saw a black trash bag moving and whimpering. Inside, he found the puppies which were filthy,  and malnourished, but thankfully they were mostly healthy.

This sort of thing happens on a much more frequent basis than many people would like to believe. The staff at the Indian Land Animal Hospital were glad they’re able to help – and that these puppies’ appear to have a good future.

Shocking Video of Hundreds of Sharks in Feeding Frenzy on North...

Tybee Island is About To Build A New $1/2 Million Bike...

York County and Clover School District To Give $14 Million Toward...