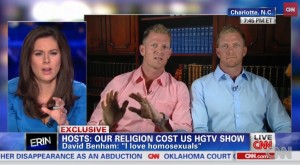 The article contained fictitious slanders and it attributed a few accusations made against their father “Flip” Benham decades ago to the recent behavior of the brothers. Once the article hit the internet, it spread like wild-fire. A small, but extremely vocal portion of HGTV’s fan-base heavily pressured them into canceling the show, posting such things as “DISGUSTING. Pull the plug on their show now!!”, “Boycott HGTV and their anti-equality shows featuring proselytizing brothers.”, and “Please do not run Conservative anti-gay programming.”

One of the accurate pieces of the article talked about when David Benham led a prayer service outside of the Democratic National Convention in 2012. Before the event, David told a radio host that the church must repent for tolerating abortion rights, no-fault divorce, legal pornography, and the homosexual agenda. Many quickly latched onto “…tolerating…the homosexual agenda”, and interpreted that as meaning “anti-gay”. It turns out, however, that the Benham Brothers are very far from being “anti-gay”.

The Benhams told CNN that HGTV had vetted them over a year ago, they knew about the past quotes and events, and the fact that they have never discriminated against anyone. The brothers also told CNN that they believe HGTV was bullied into the decision. During the interview, David Benham clearly stated into the cameras, “we love homosexuals”.

The brothers also issued this statement which reads, in part, “Anyone who suggests that we hate homosexuals or people of other faiths is either misinformed or lying … We do not, nor will we ever discriminate against people who do not share our views.” They added, “If our faith costs us a television show then so be it.”

In this exclusive video, the Benham Brothers give clear reasoning for their statements;