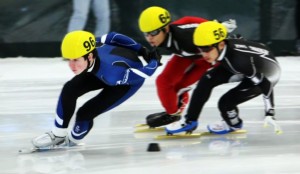 David Skoda just dominated the U.S. Speedskating trials this past weekend, which qualified him for the World Championships coming up in Poland.

David has been speed-skating for 13 years, and considering that he is now only 16 year old, that’s a fairly impressive fact. He started speedskating at the age of three, originally on a hockey player but hated having to put on and take off all the hockey pads. One day at the rink, his mom saw a flyer on the rice and thought the boy should spend his time focusing on just speed.

Skoda is now officially one of America’s top junior speedskaters.

“I went in trying to see the fastest times I could get,” he said. “I wasn’t actually thinking about making the team.”

The U.S. trials were three-day event, held in Milwaukee, to determine the U.S. Speedskating Junior World team, including two sprinters, two all-around skaters, and one who finished with the best percentage closest to world record time.

Skoda will train two days a week in Saratoga and every weekend in Lake Placid before leaving for Warsaw, Poland this coming February.

Bank of America Doesn’t Seem Phased At Their New $7.65 Million...

What’s The Deal With Ukraine?